The BBC gets to grips with robot cameras 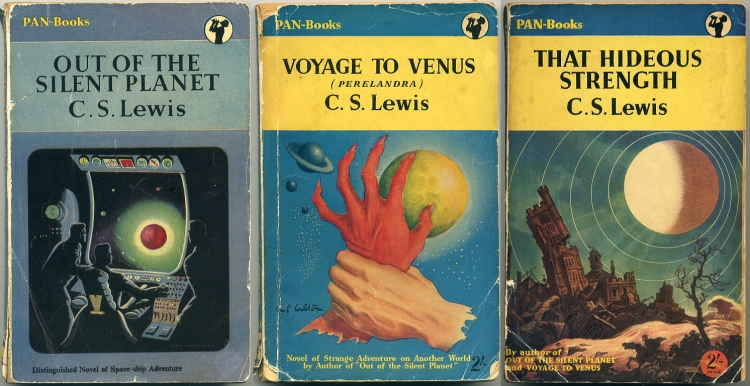 That Hideous Strength was published in 1945, the third of CS Lewis’s ‘space trilogy’. It’s a curious book, weaving dystopian sci fi, magic from the Dark Ages of Britain and Christian allegory into an adventure story about progress.

George Orwell thought the end result too unruly, commenting in a review for the Manchester Evening News:

Unfortunately, the supernatural keeps breaking in, and it does so in rather confusing, undisciplined ways…

However if you can stand the lack of discipline (Orwell thought it ultimately a ‘book worth reading’ by the way), Lewis is thought-provoking on the natural world, technological progress in general, and the idea that we now call transhumanism in particular.

Sugar and spice, and all things nice

The villains of That Hideous Strength are the National Institute for Co-ordinated Experiments (or NICE – to the discomfort of present-day clinical readers), an ambiguous and elastic organisation who claim to take a scientific approach to solving the social problems of the modern world.

To the general public, NICE’s purposes are fuzzy but benign. Mark Studdock, a young social scientist with a fellowship at a nearby university is ambitious and curious about the organisation. When discussing NICE with his academic peers, Mark speaks enthusiastically:

Through flattery and coercion on the part of some NICE staff with whom he makes contact, Mark abandons his fellowship and starts to work for the institute. Gradually he is initiated into NICE’s inner circle and trusted with NICE’s true purpose.

One night Filostrato, an Italian scientist, draws him to one side and tells him:

Filostrato has successfully preserved, by regulating the atmosphere and blood supply, the decapitated but still-living head of a notorious scientist, which regularly gives instructions to members of NICE. In time, Mark discovers the head (unknown to Filostrato) is actually a conduit for instructions from ‘macrobes’ – rather like fallen angels.

The NICE scientists’ objective of defeating death (or organic life) is contrasted with an alternative, and typically Lewis, perspective inspired by ancient British myth and Christianity. This view is embodied, and fought for, by a small resistance who are joined by Merlin, who wakes from hundreds of years of sleep.

Merlin has lain interred under a wood since the dark ages and proves to be a wild nature-lover with 5th century habits and behaviours. He is aided, and becomes indwelt, by the Oyéresu (good angels who preside over nearby planets, and the inverse of the macrobes) to destroy NICE, including its scientists and the preserved Head.

As a side note, a running joke and symbol of NICE’s ambiguity is the obfuscatory language used by Wither, the organisation’s Deputy Director, who pulls the strings of the institute. Wither talks rather like Sir Humphrey Appleby. When asked by Mark to tell him exactly what his role at NICE would constitute, Wither replies:

We do not really think, among ourselves, in terms of strictly demarcated functions, of course. I take it that men like you and me are – well, to put it frankly, hardly in the habit of using concepts of that type. Everyone in the Institute feels that his own work is not so much a departmental contribution to an end already defined as a moment or grade in the progressive self-definition of an organic whole.

In the final chapters of the book, Merlin defeats NICE and distributes some poetic justice by casting the curse of Babel over NICE’s employees, causing them to become completely unable to understand each other. Finally, they are eaten in a bloody scene by the animals used in NICE’s experiments.

Like other dystopias, That Hideous Strength is a warning about what happens when progress is delegated to ideology of the few and divorced from the needs of the many. NICE professed to be working on public health and sanitation and other worthy goods, but instead were pursuing a madcap agenda, guided by dubious forces.

That Hideous Strength is also a commentary on what is lost when we rely on technology to fulfill our dreams. NICE’s real agenda was a war on nature. At one point, Filostrato orders a row of beech trees to be cut down, explaining to his colleagues that his idea of perfection would be to synthesise trees:

At present, I allow, we must have forests, for the atmosphere. Presently we find a chemical substitute. And then, why any natural trees? I foresee nothing but the art tree all over the earth. In fact, we clean the planet … And why not? It is simple hygiene.

Oxford in the 1940s seems very far from 21st century California, but the ideas that Lewis attributed to NICE and Filostrato are fresh as ever – and increasingly popular. Ray Kurzweil, an inventor (currently employed by Google) and leading proponent of transhumanism, is impatient with nature’s pace:

Biological evolution is too slow for the human species. Over the next few decades, it’s going to be left in the dust.

Kurzweil imagines a time when people will transcend the “limitations of our biological bodies and brain” and predicts humanity will soon be able to scan human brains in such detail that it becomes feasible to reverse engineer them.

Once this is possible, the next logical step is for humans to be able to upload their brains to computers, effectively protecting themselves from bodily decay and becoming immortal – an idea now familiar through various films.

Merlin, the wild man, stands out in clear contrast to NICE’s techno-utopia. Where NICE want to eliminate biology, Merlin is deeply connected with nature. At one point, Dimble, another academic and one of Merlin’s allies in the resistance, muses about the difference between Merlin’s worldview and the NICE scientists:

Merlin is the reverse of Belbury [where NICE is based]. He’s at the opposite extreme. He is the last vestige of an old order in which matter and spirit were, from our modern point of view, confused. For him every operation on Nature is a kind of personal contact, like coaxing a child or stroking one’s horse.

After him came the modern man to whom Nature is something dead – a machine to be worked, and taken to bits if it won’t work the way he pleases. Finally, come the Belbury people, who take over that view from the modern man unaltered and simply want to increase their power by tacking onto it the aid of spirits – extra-natural, anti-natural spirits [i.e. the macrobes] …

In a sense Merlin represents what we’ve got to get back to in some different way.

Through That Hideous Strength,  Lewis warns that the power that technology appears to give us threatens our relationship with the natural world. While we may appear to have the ability to synthesise nature, we have forgotten just how interlinked we are; made of the same stuff and by the same Creator.

It’s easy to read Lewis as anti-progress, in his novels and other writings. When approached by the (presumably tongue-in-cheek) Society for the Prevention of Progress with an invitation of membership he replied in similar style, signing the letter “Yours regressively”:

While feeling that I was born a member of your Society, I am nevertheless honoured to receive the outward seal of membership. I shall hope by continued orthodoxy and the unremitting practice of Reaction, Obstruction, and Stagnation to give you no reason for repenting your favour.

This blog hopes to take a more open or curious (perhaps technorealist) approach. There may be parts of transhumanism thinking that are compatible with Christian views, which will be explored in future posts.

But any worldview which views nature as an expendable and replaceable commodity should send alarm signals to readers who take That Hideous Strength to heart.

But what’s the name for views that occupy the middle ground?

Technorealism (which appeared as a term in the 90s but seems to have died away) sought to “expand the fertile middle ground between techno-utopianism and neo-Luddism”. Technorealists advocated applying tech “in a manner more consistent with basic human values”.

Also occupying the middle ground are the complementary terms Techno-progressivism and Bioconservatism. Both terms are frequently used – and were perhaps coined – by the Institute for Ethics & Emerging Technologies, a think-tank with close transhumanist links.

Techno-progressivism describes an optimistic stance towards technology, recognising a key role for it in effecting positive change. Bioconservatism is a more wary position on tech (though less so than Technophobia), conscious of its threat to existing social patterns.

Through interviews with the UK’s public, Ipsos MORI have identified six segments (which are simply descriptive, rather than ideological) that illustrate how the UK population respond to science, and by extension, to technology. MORI describe the segments as:

This chart illustrates how the UK’s population is distributed across the six segments in 2011 and 2014. While the number of Confident Engagers and The Indifferent have fallen, the Disengaged Septics and Late Adopters have risen:

MORI also report links between the segments and religion. On average, 13% were likely to attend a religious service at least a week, but this figure rose to 21% for members of The Concerned. 33% of Muslims belonged to The Concerned segment, but Muslims only accounted for 10% of that segment’s membership.

Michael Sleasman of The Center for Bioethics & Human Dignity, a research centre at a Christian university, outlines three (lengthily-named) responses to technology he has observed among Christians: technological sentimentalism, technological messianism and technological responsibilists.

[Technology is a] distinct human cultural activity in which human beings exercise freedom and responsibility in response to God by forming and transforming the natural creation, with the aid of tools and procedures, for practical ends or purposes.

This post is simply sketching out the semantic terrain… More on what the middle ground of techno-progressivism and technological responsibilism look like in future posts.