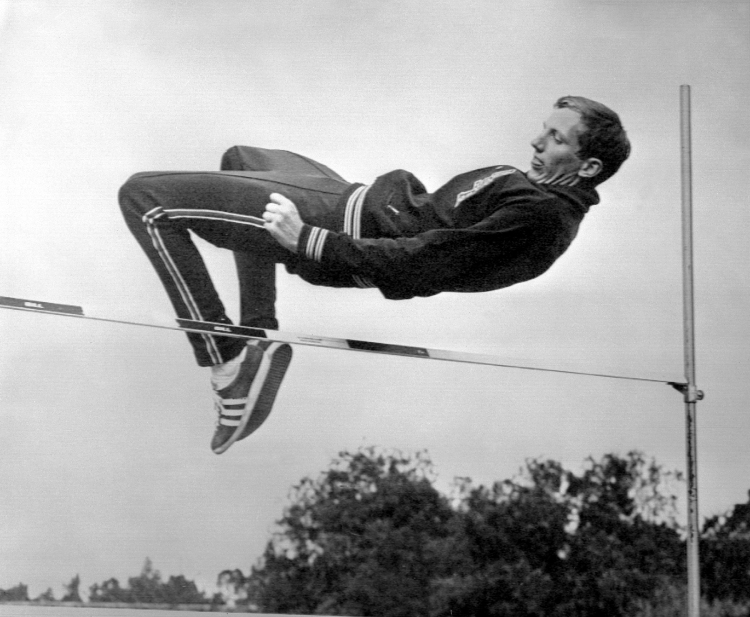 In the Olympic games at Mexico in 1968, Dick Fosbury changed the high jump forever, when he left all other competitors behind and set an Olympic record of 2.24m. His winning technique of twisting his body and clearing the bar backwards is now universally adopted.

The Fosbury Flop has enabled high jumpers to clear new heights ever since, now over 2.4m. Dick Fosbury has since become a symbol of innovation, signed by Mazda to help advertise their cars in 2013. Fosbury’s new technique raised the bar for everyone.

As a ‘natural’ technique, the Flop was unusual but legitimate. Innovations that use technology to push human boundaries (in athletics or elsewhere) are more controversial, often becoming a discussion over whether the change is therapeutic or an enhancement.

For example, a prosthesis that allows an athlete with missing legs to compete with biological runners (as Pistorius did in the 2012 Olympic and Paralympic Games) is a therapeutic use, while a prosthesis that enabled speeds faster than biological legs would be enhancement.

The therapy vs. enhancement distinction sounds promising, but is ultimately less meaningful than you might think. The reason is that the definition of what is a ‘normal’ state of health has always changed over time – like in a high jump, the bar is moved from time to time.

Definitions of disease have altered over time, as well as differing between class, gender and culture. As we age, most of us expect our bones to break more easily, but osteoporosis was reclassified from a natural part of getting older into a disease by the WHO in 1994.

An opposite example is homosexuality, first thought of as an ‘act’ (and a capital offence in the UK after 1533), then a ‘state’, then a mental disorder, before finally removed as a listed disease from the American Psychiatric Association’s Diagnostic and Statistical Manual II in 1974.

Ronald Cole-Turner, a professor of theology and ethics writes about the line between therapy and enhancement:

“Disease” itself is a socially constructed category, not something unambiguous in nature, and the list of diseases changes over time, often in light of cultural preferences or the marketing of a new drug. If “therapy” treats “disease”, it treats a moving target.

Cole-Turner goes on to quote Leon Kass, former chair of the President’s Council on Bioethics who describes as “certainly no friend of technological enhancement”. Kass says:

Needless arguments about whether or not something is an ‘enhancement’ get in the way of the proper question: What are the good and bad uses of biotechnical power? What makes a use “Good”, or even just “acceptable”?

One thought on “Raising the Bar: Therapy or Enhancement?”