🏛️👨‍🎓 As @CommonsSTC reforms, MPs' lack of diversity & STEM education has been mentioned, so here are 5 data sources on MPs' degrees… 1/7

An earlier post quoted Carl Sagan, who was convinced that not enough people really understand science and technology: “a prescription for disaster”, he said. So what fields of knowledge are our national decision-makers most comfortable in?

There’s been plenty of media noise in recent years about ‘professional politicians’ and more recently about Labour’s choice of candidates, as well as the occasional FoI request to government departments to find out what qualifications ministers have.

But information on MPs’ qualifications doesn’t seem to be readily available… Until now perhaps! The data in the chart below was collected by a script which looks up the Wikipedia entry for each MP, searches for mention of their degree, and if found, categorises it: 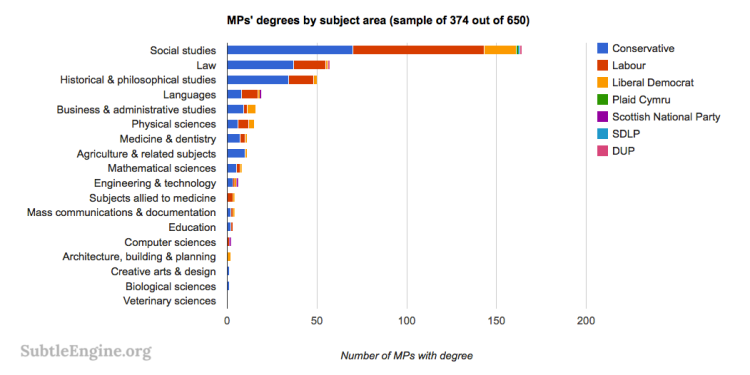 Of 650 MPs in the 2010-2015 parliament, the script found data on the degrees of 374 MPs, about 58% of the total. The other 276 may not be graduates, or their Wikipedia entry may not mention it, or be specific enough to categorise (some entries refer to a BSc or BA).

Of the sample, the most common subject area (using HESA’s subject areas) was social studies, which includes geography, economics etc. Following a sharp drop, the next category was law, and historical and philosophical studies, before another fall to languages.

The most common STEM (Science, Tech, Engineering, Maths) subject area (based on this definition) was physical sciences (14 MPs in the sample qualified in chemistry, physics etc.). 8 MPs had degrees in maths, 6 in engineering & technology and 2 in computer sciences.

Is the high proportion of social studies graduates in parliament actually unusual, or does it simply reflect the popularity of those subjects? This chart compares the distribution of MPs across subject areas with full-time students at UK universities in 2012/13:

Of the three biggest parties; 11.3% of Conservative MPs, 11.9% of Labour MPs and 23.7% of Liberal Democrat MPs in the sample studied STEM subjects. However, taking sample sizes into account, the Lib Dems’ lead on STEM isn’t statistically significant.

About 32 MPs (9% of the sample) studied PPE (Philosophy, Politics and Economics) at Oxford. A recent BBC article about PPE in Westminster quoted graduate and columnist Nick Cohen talking about his subject’s penetration in government:

[PPE is] a degree for generalists, and British society has always loved generalists … But I think we’d certainly benefit from more scientists and engineers at the top.

Does this matter? Of course degrees in subject areas other than STEM are valuable; qualifications in politics or history are obviously appropriate for an MP. And of course it’s true that many social studies graduates have an excellent understanding of technology.

But the bias away from STEM is still striking. One humdrum argument for more tech know-how in Westminster is that as public services become more IT-dependent, ministers need a better understanding of the pitfalls of technology. As the Institute for Government found:

But the more interesting arguments are related to future trends; say if human enhancement becomes commonplace, or robots have a big effect on the labour market. Legislators are keen to promote STEM, but does parliament itself have the knowledge it needs to keep up?

There’s now a sequel to this post that looks at Lords’ degrees.

Note on the script

The above charts may not be completely accurate; they depend on the MP’s Wikipedia entry to correctly record the degree, as well as the script’s ability to correctly categorise degrees into subject areas. The script is on Github, if you’d like to see it – or improve it!

Thanks to TheyWorkForYou for making the list of MPs available, and to Wikipedia for making its data available via an API, as well as its contributors for researching MPs and keeping their articles up to date. Any errors are highly likely to be the author’s.

7 thoughts on “MPs’ Degrees: What Do They Know?”